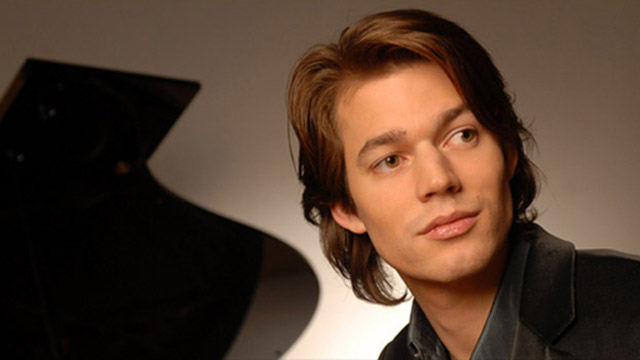 The talent of the young David Fray is so overwhelming that he is one of the rare pianists of the new generation who was recently signed up, in exclusivity, by one of the major current labels « Virgin Classics », following a unique and triumphant concert held in the Châtelet theatre in June 2006. For this concert David Fray was a last minute replacement, with the same programme, for Hélène Grimaud
Since that date David Fray’s career has progressed remarkably. After releasing several CDs among which Bach/Boulez Piano Concerto in 2007, Bach concertos in 2008 – which was the opportunity for us to make the film Swing, Sing & Think about the recording – and a CD on Schubert in 2009 (all of which were singled-out on the international scene) David Fray received the award Soliste instrumental de l’année (Best Instrumental soloist of the year) at the Victoires de la Musique classique (French classical music awards) in 2010.
His beautiful performance, the rhythmic impulses and the vital energy he produces, his imagination and his charisma, make David Fray a pianist destined for a very bright future.